How Do Extractables Impact My Samples After Filtration?

Extractables are possible contaminants from plastic products that most commonly originate from the synthesis of the polymer, resin components, manufacturing process, or use of additives, which are necessary for the performance of the product. Extractables can be inorganic, may contain metals, and/or organic compounds.

How can extractables impact my sample?

Extractables may be released from a plastic device under certain conditions and, if present, may represent a risk of passively migrating (or “leaching”) into the sample leading to unintended consequences. If a filtration device has a high level of extractables there is a risk of contaminating the filtrate. It is important to be mindful of these compounds and consider how they could impact an experiment or accumulate in downstream processes.

When evaluating extractables, less is more. The lower the extractables, the less chance of those compounds leaching into your filtered sample.

"When evaluating extractables, less is more. The lower the extractables, the less chance of those compounds leaching into your filtered sample."

What methods are used to test for extractables?

Methods developed are based on United States Pharmacopeia (USP) extraction conditions and testing requirements for plastic components. Triplicates from the same lot of polystyrene receiver bottles need to be tested with 100 mL of three extraction solutions (water, 50:50 ethanol:water, and 2% nitric acid in water). The polystyrene receiver bottles with respective extraction solutions are then incubated for 21 days at 50°C before analysis.

Three analyses are then performed on each of the extracts: Total organic carbon (TOC), λmax absorbance & elemental analysis for analyzing metals.

How can users avoid extractables in the filtrate?

Key to avoiding extractables in filtrate is choosing the best receiver bottles. These bottles should be manufactured using virgin resins from the highest quality suppliers which ensures consistency and quality. The manufacturing must be optimized and use robust processes that avoid the use of various additives and slip agents as much as possible. It is also important that the bottles are manufactured using a quality assurance system including a change notification system in place to inform users of any changes to the product.

How do Nalgene Raid flow filtration units perform compared to other filtration devices?

TOC results show that the Nalgene™ Rapid-Flow™ filtration units were 50–70% lower in detected TOC levels when compared to the equivalent receiver bottles from three other suppliers. In direct comparison, the Nalgene Rapid-Flow receiver bottle had 996 parts per billion (ppb) verses 2074 ppb for supplier 1 (Figure 2). TOC often results from the catalysts used during the synthesis of the polymer, the polymer itself, or from the slip agents used during molding.

Absorbance data (λmax) at 245 nm show that that the concentration of extractables was 30–40% less in the Nalgene Rapid-Flow receiver bottles when compared to the equivalent receiver bottles from three other suppliers. In direct comparison, the Nalgene Rapid-Flow receiver bottle absorbance results were 0.153 verses 0.217 for supplier 1 (Figure 3). Increased absorbance is directly proportional to an increased concentration of extractables when comparing similar λmax values.

The metals analysis results show that there were no detectable metals in the Nalgene Rapid-Flow receiver bottles whereas silicon (28Si), titanium (47Ti), and tantalum (181Ta) were detected among the equivalent receiver bottles from supplier M (Figure 4). 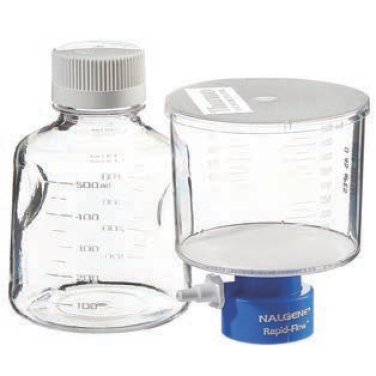 Back to Lab Reporter